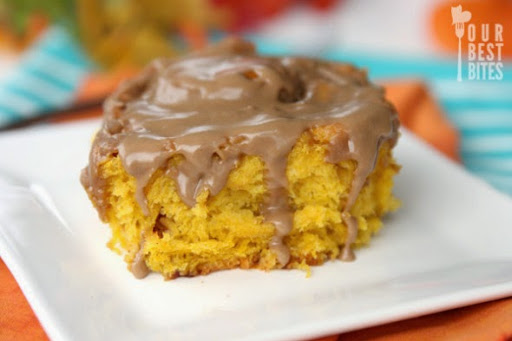 Cinnamon Rolls are probably my husband’s most favorite treat in the whole world.  And he admitted to me the other day that he never even thought twice about the whole pumpkin spice craze until he married me and thought I was a crazy person.  See, I was obsessed with pumpkin before it was a “thing.”  Like, well before Starbucks invented their infamous latte, or you could buy pumpkin spice flavored peanut butter and mouth wash.  (Okay, I made up the mouthwash thing, but I wouldn’t put it past those sneaky people at Listerine.)  And over the years I’ve converted him too, and now he loves pumpkin-anything as much as I do.  So the other day when he casually mentioned like, 4 times (really, you only have to mention baked goods to me one time to make it happen) that cinnamon rolls sounded soooo good, I whipped up a batch of my Everyday Cinnamon Rolls, but with a Pumpkin Spice twist.

This recipe is easy because there’s no proofing necessary with the yeast.  Just toss it in a bowl with the other dry ingredients and whisk them together.

Add in an egg and some pumpkin puree

and then with the mixer running, drizzle in a warm milk and melted butter mixture.

That will give you a nice orange-tinted batter, to which you’ll add more flour until you get a nice, soft dough.

I say this every time I post a sweet roll recipe, but resist the urge to add more flour than needed.  This dough is incredibly soft.  The trick is to scrape it onto a well floured surface and handle it very lightly.  Don’t knead in all of the flour, just dust all the sides so it won’t stick to you, and especially make sure the bottom is dusted well so it doesn’t stick once you roll it out.  A giant silicone dough mat is my absolute favorite here; well worth the price- I use mine ALL the time.

While your dough is resting for just a minute, whip up the filling.  This is basic cinnamon roll filling: butter, brown sugar, and a generous douse of cinnamon, plus those pumpkin-spicey flavors of ginger, nutmeg, and cloves.  You could use pumpkin pie spice as well, but I find I like using the individual spices better.

Gently spread the filling on and push it out to the edges.

Then roll those babies up and slice them (I use dental floss, thread works great too.  See this post if you have no idea what I’m talking about!)

Place them in a pan and let them sit to rise.  I have a “proof” setting on my Thermador Oven, but if you don’t- try placing them in a cold oven with the door shut and placing a pan of boiling water underneath them.  It creates the perfect little steam room to make nice, plump rolls.

Once they’ve risen, pop them in the oven until they’re golden brown and then slather them with a little maple glaze.

Make sure to eat them warm, and I won’t tell anyone if you even slather a little extra butter in there.

Dough:Place milk and 4 Tbs butter in a microwave safe bowl. Heat on high for about 1 minute 30 seconds. Butter should be at least partially melted. Stir and set aside. In a large mixing bowl of a stand mixer, combine 2 C flour, yeast, white sugar, and salt. When milk mixture has cooled to warm (not hot) add it to the flour mixture along with the pumpkin and egg while the beater is running.  Beat until well combined, about 1 minute. Scrape down sides of bowl and switch to a dough hook.  Add remaining flour only until dough comes together and barely leaves the sides of the bowl. It should be very soft and slightly sticky. Continue to let the dough knead for 3-4 minutes.  Scrape dough out onto a floured surface and let rest for about 10 minutes while you make the filling.

Filling:make sure butter is softened well, but not melted. Beat with brown sugar and spices until smooth.

Assembly:Dust dough ball with flour and make sure surface is well floured.  Do not overwork dough.  Gently roll dough into a rectangle about 18 x 14 inches (eyeball it). Spread brown sugar mixture (it will be slightly thick, you might have to “crumble” it) over the surface and use your fingers or the back of a spoon to gently spread around. Roll up from the longer side of the rectangle and pinch edges closed. Score the roll into 12 equal pieces and use dental floss or thread to cut into rolls.  Place in a 9 x 13 pan that has been sprayed with cooking spray. Cover pan with a clean towel and let rise in a warm place for about 30-45 minutes. If you have double ovens, place them in an oven with a pan filled with boiling water while you preheat the other oven.  In the mean time, preheat oven to 350 degrees.

When rolls have finished rising bake for 25-35 minutes or until light golden brown.  Mix icing ingredients and then spread on while still warm. Makes 12 rolls.